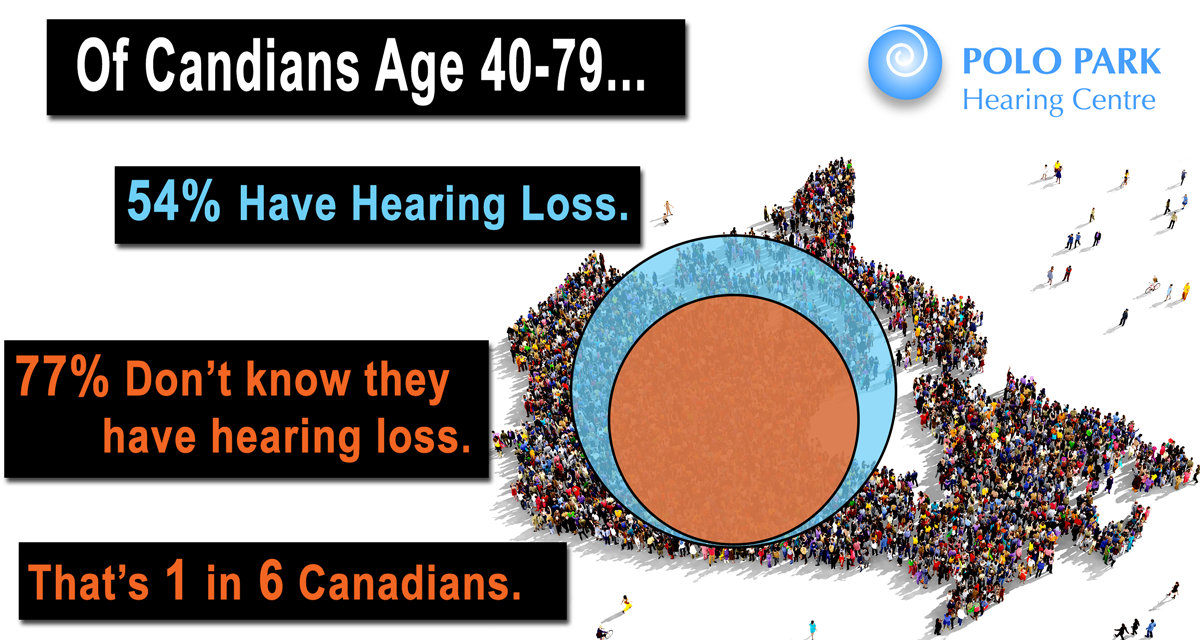 A recent StatsCan report revealed 8.2 million people aged 40 to 79, has at least mild hearing loss in one ear. That number represents 54% of the age group measured by the Canadian Health Measures Survey (CHMS) for the period from 2012 to 2015. While that number is quite significant, it’s not the shocking part of the data analyzed. The shocking part is that 77% of the group studied, some 6.3 million Canadians, had not perceived any loss of hearing.

6.3 M that don’t know they have hearing loss represents some 17% of Canada’s total population. That’s roughly 1 in 6 people in this age group alone.

The answer is fairly simple. For most people, hearing loss is a very gradual process that isn’t noticed until significant hearing loss begins to affect daily lives. If someone’s hearing loss occurred all at once it would undoubtedly be immediately noticeable. And that does happen in some situations. People experiencing an extremely loud noise such as a gunshot or explosion, permanently lose their hearing in that instant. Unfortunately, it's all too obvious they have had an experience that will result hearing loss.

A classic example of how unnoticed hearing loss occurs is someone working a job in a noisy environment with either no or insufficient hearing protection. Every day they receive an excessive amount of noise that ever so slowly damages the tiny hairs in the inner ear that receive sound waves. They may go home and perhaps have a little bit of a duller hearing, but their hearing it comes back the next day. We should say it appears to come back next day but every day it is a tiny amount less than the previous day. In fact, measuring the amount of hearing loss that occurs over a day, a week or even a month might not show the miniscule bit of hearing loss that has occurred in that short period of time. However, over the years each tiny bit of hearing loss due to the damage of another hair cell, adds up because sadly, those little hair cells don’t go back. Hearing loss is irreversible and permanent. Luckily it can be treated.

Hearing loss no matter how small it is continuously adding up until it becomes an obvious problem.

The last set of reasons that we incur hearing loss over lifetimes is partly controllable and partly uncontrollable. Hearing loss is synonymous with aging because as we do get older the inner ear hair cells die off naturally. Health conditions such as diabetes that restricts blood flow through small capillaries are also associated with hearing loss. The illicit say circulatory conditions and general health due to a lack of exercise and poor nutrition exacerbate hearing loss as well. One last thing to remember is that people are very good at compensating for deficiencies. We often see people that have learned which ear hears better and you can see them turn that ear towards what they are trying to listen to. Also, people will avoid conversations with multiple people at once because of the increased mental processing power required to decipher speech clearly. People also change their behavior so as not to be in situations where they can’t hear. This is a serious problem as it can lead to social isolation and depression in extreme cases.

Simple Signs You May Have Mild Hearing Loss

there are lot situations where people with even mild hearing loss, even if it is only in one ear, will begin to struggle. The worst environments for them to be in his normally places with high background noise. Here are some common situations where the problems associated with hearing loss is more pronounced.

What To Do If You Suspect There’s A Problem?

As soon as you suspect a problem it’s a good idea to seek help by booking a hearing evaluation. A complete evaluation determines the cause of your hearing loss and how you can best be successfully treated to regain a comfortable lifestyle. To book and evaluation simply call us (204) 788-1083 or contact us online.

More numbers from the StatsCan report on unperceived hearing loss:

When age, sex and severity of hearing loss were taken into account, the odds of having unperceived hearing loss were 60% higher among individuals who had never worked in a noisy environment, compared with those who had.

For people who had experienced tinnitus (e.g., ringing in the ears), the odds of having unperceived hearing loss were 50% less than those who had never had tinnitus.